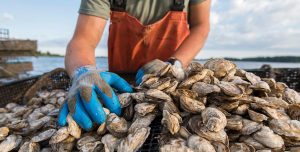 HB 1217
Delegates Mautz and Adams
NATURAL RESOURCES – OYSTER INSPECTION AND SEVERANCE TAXES – INCREASE
Increasing the amount of the inspection tax levied on marketable oysters shipped in the shell to any place outside the State from 30 cents to $1; increasing the amount of the severance tax levied on oysters caught within certain natural oyster bars from $1 to $2 per bushel; and requiring that $1 of the severance tax levied be distributed to certain county oyster committees for the repletion of natural oyster bars within the waters of the counties.
Effective Date: July 1, 2022
NR, § 4-1020(a) through (c) – amended
Committee: Environment and Transportation
Bill Hearing: Wednesday, 3/4 at 1:00 pm
Position: SUPPORT with amendment to include Baltimore County Oyster Committee in Sec. 4-1020 (c)(3)

Delegate Boyce (Dist. 43)
UNLAWFUL TAKING OF OYSTERS FROM SUBMERGED LAND LEASES, AQUACULTURE LEASES, AND WATER COLUMN LEASES – PENALTIES
Requiring, rather than authorizing, the Department of Natural Resources to suspend a certain tidal fish license on conviction of the license holder for a certain violation; requiring a certain person who has a tidal fish license suspended under the Act to complete a certain class at the person’s expense; prohibiting a person who has a seafood dealer authorization from purchasing, offering to purchase, or possessing oysters that were unlawfully harvested from a certain lease under certain circumstances; providing certain penalties; etc.
Effective Date: July 1, 2021
NR, §§ 4-11A-16 and 4-1201 – amended
Committee: Environment and Transportation
Bill Hearing: Wednesday, 1/20 at 1:00 pm (view committee hearing here)
Position: Support with Amendments
(that guarantee equal treatment under the law for TFL holders, licensed seafood dealers AND aquaculture leaseholders)

SB 203AQUACULTURE LEASE APPLICATIONS – NOTICES, PROTESTS, MEETINGS, AND CONFLICT RESOLUTION
Altering the property owners that the Department of Natural Resources is required to notify of applications for certain aquaculture leases to be issued in the Chesapeake Bay or the Atlantic Coastal Bays; requiring the Department to work with a certain petitioner and a certain applicant to mitigate certain concerns and to consider conflict resolution between shoreline property owners and aquaculture lease applicants before issuing a lease; etc.
Effective Date: June 1, 2021
NR, § 4-11A-09(g) – amended
Committee: Education, Health, and Environmental Affairs
Bill Hearing: Wednesday, 2/10 at 1:00 pm
Position:

SB 442
Senator Klausmeier (Dist. 8)
AQUACULTURE LEASES AND SHELLFISH NURSERY OPERATIONS – WETLANDS
Exempting under certain circumstances certain activities and the use of certain equipment associated with an aquaculture lease or a shellfish nursery operation from the requirement to obtain certain licenses from the Department of the Environment or the Board of Public Works; establishing that certain aquaculture activity and the installation of certain equipment on a pier for the cultivation of shellfish seed under a certain permit are lawful uses on private wetlands; etc.
Effective Date: October 1, 2021
EN, §§ 16-101(i), 16-202(h), and 16-304 and NR, § 4-11A-23(d) – amended and NR, § 4-11A-10(d-1) – added
Committee: Education, Health, and Environmental Affairs
Bill Hearing: Wednesday, 2/10 at 1:00 pm
Position:

HB 210 / SB 342 [withdrawn by sponsor]
Senator Crosby
AQUACULTURE – LEASES IN WATER COLUMN – RIPARIAN RIGHT OF FIRST REFUSAL
Establishing that a riparian property owner or lessee shall have the right of first refusal to apply for and, if approved, obtain a water column lease, or an aquaculture lease for use in the water column in an Aquaculture Enterprise Zone, applicable to a certain area that fronts the riparian property, subject to certain standards and requirements; requiring a person other than the riparian owner who applies for a certain lease in an area subject to a right of first refusal to provide a certain notice of the lease application; etc.
Effective Date: June 1, 2020
NR, §§ 4-11A-05 and 4-11A-08 – amended
Committee: Environment and Transportation
Bill Hearing: Wednesday, 2/12 at 1:00 pm [Hearing Cancelled]
Position: OPPOSE (refer to new apolitical OAC)

Oysters in the News

Trove of oyster shells discovered in Potomac River. Now what?

Setting The Story Straight With Facts, Not Opinions by Rob Newberry

Why You Want Oysters and a Salt Marsh Between You and a Hurricane
Vox, June 3, 2019

Livelihood Diversification and Maryland Oysters: What it Means, and Why We Care
Sea Grant Maryland, June 21, 2018

Pearl in the Making, Programs Bolster Oysters in the Chesapeake
U.S. Fish & Wildlife Service, May 29, 2018

HB924 puts sanctuaries out of bounds
Dorchester Banner, June 2, 2017
This is the second story in a three-part series about oyster sanctuaries and their effects on Dorchester County.

Op-Ed: What’s the Truth about Maryland’s HB 924? By Marc Castelli
The Chestertown Spy

Letter to DFA from DNR on Oyster Mortalities 11/2016

A symposium for Maryland’s oyster industry: innovative ideas from around the country

Comments on Oyster Replenishment RFP
DFA, July 2019
A Stock Assessment of the Eastern Oyster in the Maryland Waters of the Chesapeake Bay
MDNR, November 2018

You may have missed

EPA to Step Up Federal Actions in PA for Water Pollution

Upcoming May 2022 Hearings of Interest